Grieg brought us the MV Skookumtruck for some TLC, including sandblasting and hull plainting and replacement of their underwater hull plating.

The Skookumtruck is an LCM-8, or “Mike” boat, the type that was operated by the US Army and Navy during the Vietnam War. They can carry 60 short tons (54 tons) of cargo and have a range of 190 nautical miles (350km) at 9 knots. 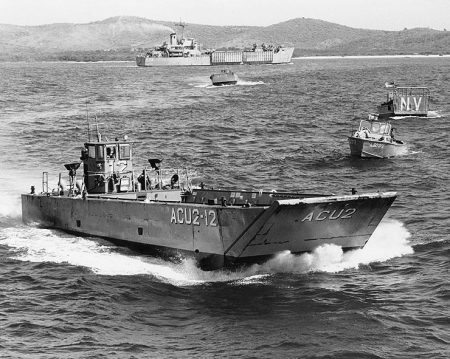 The bow ramp is controlled by air compressors, one on either side of the ship. The LCM-8 was the bigger brother of the smaller LCM-3s and the LCM-6s, which would operate ship-to-ship or ship-to-shore. Instead, the LCM-8 would transport vehicles between Johnston Atoll in the mid-Pacific and the shores of Vietnam. They could carry one M48 or M60 Tank, or 200 troops. Some LCM-8s were modified to perform command, personnel, salvage and firefighting duties. Another modification of the LCM-8 outfitted the vessel with a flamethrower; these were known as Zippo boats. More recently, LCM-8s have been used in Operation Desert Storm, Somalia, and patrolling the Potomac following the 9/11 attacks.

While she was out of the of the water we also took the opportunity to do a few upgrades, including a wheel house etension and hand rail replacement.

Please follow all Manufacturer's suggestions. Information on this website is not intended to replace the advice of a qualified Marine Technician.

I want to send you this note to thank you for the incredible service you provided last week regarding repairing my boat. I was able to go out on Sunday … END_OF_DOCUMENT_TOKEN_TO_BE_REPLACED

Recently, I purchased a Beta Marine diesel from Ocean Pacific.  Logistics made it impossible for the OP boatyard to perform any of the work required, but that did not prevent … END_OF_DOCUMENT_TOKEN_TO_BE_REPLACED

Thank you for you excellent work and ongoing communication. I am very impressed with your professionalism. ~ owner of the Samba

The run from Campbell River down to Comox went very well. There was little wind so I motored all the way. The Beta 14 performed perfectly. I like the single-handle … END_OF_DOCUMENT_TOKEN_TO_BE_REPLACED